In February, in what now seems like a different world, we launched the Real Face of Construction 2020. The report looked broadly at the social and economic impact of construction and one aim was to illustrate the extent to which construction, and the built environment it creates, shapes the lives of everyone.

It was well received and attracted much attention. One theme that generated significant media coverage was that the industry, as those who work in it know, is much wider and bigger than the official industrial sector of construction described in the statistics we regularly read.

However, there were some questions raised about the data on average earnings. This compared the average earnings of employees in construction with those in other sectors. The questions were around whether or not the use of full-time male employees as a measure of a comparison between construction and other industries risks disregarding the contributions of both women and part-time workers in the UK construction industry, particularly at a time when there is a recognition of the need to grow the construction workforce, encourage more flexible ways of working and more inclusive recruitment policies.

The point made was welcome – the use of male-only data does exclude women from the comparison. But this exclusion was not made without consideration. A footnote was added to explain that this was to account for the gender pay gap. It was felt that not making a reasonable effort to account for major and pertinent differences between industries when making comparisons, notably the significant under representation of women in “construction”, as defined by the ONS, could potentially, from an economic analysis point of view, undermine the validity of the comparison being made.

Statistically, the inclusion of women and part-time workers from other sectors would have suppressed the average earnings figures for those sectors far more than for construction. So, in pursuit of a fairer comparison, the exclusion of women was really about the impact on other sectors and not on construction, where average earnings are heavily determined by the predominance of male workers. When it comes to gender balance, construction is an outlier. Indeed, it is an outlier generally when it comes to diversity when compared with other sectors of the economy.

More detailed figures could have been included to cover comparisons of earnings of women in construction with other sectors. This may have usefully highlighted within the report issues of gender imbalances within the industry and pointed to the wider problem construction has with diversity. However, these issues run deep and are deserving of a lengthier, more detailed and considered discussion than could have been afforded within the scope of this report. Some of these we will highlight below.

Before seeking to explain in more detail the rationale for using full-time male employment as a comparator, it is worth providing clarity on the view CIOB holds on diversity, these chime with those long held and promoted by the author of the report.

Firstly, it is hard to defend the industry’s record on diversity. Nor would the CIOB wish to. The figures speak for themselves. The case for greater diversity is more obvious in construction than any major industry in the UK. Just 15% of workforce jobs in construction, as per the limited ONS definition of construction, are held by women and that figure falls to 10% if we count full-time jobs. This is lower than all other industry sectors including mining and quarrying.

The statistics for employment of women in construction cast the industry as a distinct outlier within the UK industrial landscape. Not only is this true of its gender mix, it is also true of its ethnic mix. Just 6% of its workforce are non-white. This compares with 12% across all industries. Its lack of diversity does not project a progressive image.

In line with the broader argument in the Real Face of Construction report, while the ONS does collect various data on gender, socio-economic background, disability etc. it’s not always consistent across the ONS and therefore it’s not always possible to make useful comparisons whilst the data is so restrictive.

Returning to the issues of gender and ethnic mix, the chart below illustrates just how unusual construction is as an industry. 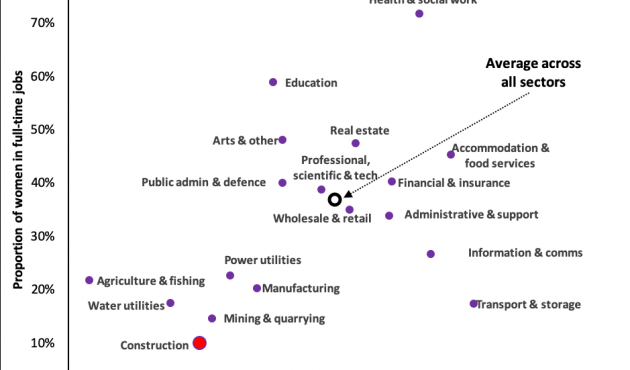 Women clearly play a valuable role and the value and fresh perspective that a greater diversity of backgrounds can add is often missed.

The report itself made no mention of the value added by either gender. But as mentioned above, a major theme of the report was not just the economic impact but how the built environment shapes lives. It follows logically, therefore, that if we are to understand and shape the lives of everyone, it is better that those constructing the built environment are as far as possible representative of those who will eventually use it. There are numerous examples, from astronauts’ spacesuits to car seat belts, where predominantly male designers fail to appreciate important gender differences.

Furthermore, the gender imbalance does not favour the construction sector economically. Construction firms struggle to recruit enough males. On that basis alone, there is a forceful case to widen the net in its search for talent. Construction being so unrepresentative and so dominated by white males adds to the widespread perception that it is an industry living in the past. This is not attractive and likely to be more of a disincentive than incentive to both women and men who feel more comfortable within a more inclusive working environment.

As stated earlier, the exclusion of women from the comparison was, as far as the statistics went, less about excluding women working in construction than women working in other sectors. And as illustrated, certainly at present, their value is huge, if incalculable, and fortunately well regarded.

There is of course a further issue with including women when seeking to compare construction with other sectors. While construction in its entirety is clearly an outlier measure on its gender mix, the pattern is even more extreme when we examine the distribution of roles within construction.

Chart 2 below illustrates that the occupations in the construction workforce are very different for each gender. Male workers are most likely to be in skilled trades, while the largest occupation for women is administration and secretarial. But, proportionately, more women working in construction are managers or “professional” than is the case for men working in construction, although in absolute terms there are more men in all the occupational groups except for administration and secretarial and sales. 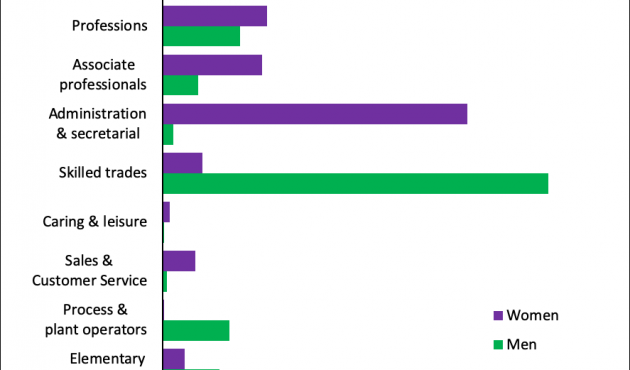 This clearly raises a serious issue, with the heavy distinction between the roles of men and women within construction – are they entrenching gender stereotypes, presenting a further challenge towards achieving greater diversity within the industry?

There is of course one further point on statistics that is pertinent to this discussion. A key theme of the report was that construction as defined for statistical purposes is a far cry from how those working within it see the industry. The standard industrial classification misses, among other categories, materials supply and most of the professions such as architecture, engineering and surveying.

While employment in these other areas of the broader construction sector remain heavily biased towards men, the proportions within these businesses are not as stark as in those within the defined construction sector. For example, 40% of those employed by architecture businesses are women. The number of architects remains at roughly 30:70 in favour of men, but among younger architects there is broadly an even balance. Town planners have a more balanced gender mix, however, within engineering the numbers are less favourable, but there are signs of change. Rebalancing these businesses and occupations will take decades as the imbalances of past intakes are worked through.

So, the construction industry as statistically defined presents a problem when comparing with other sectors. It is a subset of the wider industry that creates and maintains the built environment. It is the assembly part, if you like. It is highly dominated by men. The occupations are highly differentiated as things stand between men and women.

It is an industry that has a significantly lower level of part-time workers. It is further confused by the high level of self-employment, which is especially male dominated.

When confronted with such a complex of variables within the data, there is a clear need to disaggregate. That is why it was decided to try to compare as much as possible on a like-for-like basis. Not to do so would have put construction in a more favourable light than perhaps it deserves given the issues it has in tackling its lack of diversity.

CIOB Director - Policy, Research and Public Affairs
Eddie has extensive experience working in the public sector working closely with government ministers, senior civil servants and other officials across a variety of regulatory and legislative issues within many facets of government policy.
Read full bio

International Day of People With Disabilities: Disability and Me - My Journey >