CIOB Home
You are here:Home Media Centre CIOB News CIOB’s CEO honoured with a degree from University of Wolverhampton

CIOB’s CEO honoured with a degree from University of Wolverhampton 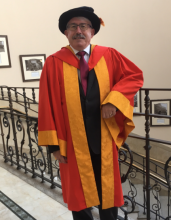 Chris Blythe OBE has been awarded an honorary degree by the University of Wolverhampton, receiving his Doctorate at a ceremony yesterday [19 September]. The CIOB’s Chief Executive is now an Honorary Doctor of Professional Practice.

Chris Blythe was among just 14 people honoured by the University during this year’s graduation ceremonies. The University awards honorary degrees to people who have made a significant contribution to their field of expertise.

After becoming a management accountant, Chris worked in a number of financial roles, including Dunlop, Birmid Qualcast, Mitel, W Canning, Corgi Toys and GKN. In 1991 he joined the North & Mid Cheshire Training and Enterprise Council, becoming Chief Executive in 1994. For more than 25 years he has been involved in vocational education and training, together with business development. Chris has been the CIOB’s Chief Executive since January 2000. In the Queen's 2017 New Year’s Honours list, he received an OBE for services to the 'Construction Industry and Government.'

In his honorary degree acceptance speech, Chris chose the theme of seizing opportunities, noting that the University offered him an opportunity with a place on a BA course 46 years ago. He concluded his remarks by saying: “take the opportunities as they come along; have belief in yourself. You can do anything you want to but above all be kind as you do it”.

He also thanked the University, adding: “I am deeply honoured by the award and for the recognition that it gives to CIOB and its members.”

Vice-Chancellor, Professor Geoff Layer, said: “The University is delighted to award honorary degrees to high-profile figures that make a significant contribution to their field of expertise.

“These figureheads provide inspiration for our students, graduates and staff.  This year, we are proud to recognise the achievements of various people across a broad range of specialisms, many of whom have local connections with the University, the city and wider region.”

Chris Blythe received his award during the University’s graduation ceremonies, at the Grand Theatre, on Wednesday 19 September 2018.