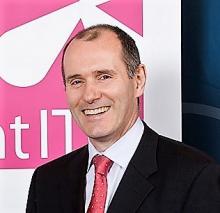 The Chartered Institute of Building has appointed Terry Watts as Managing Director reporting to the Chief Executive Chris Blythe.

Terry, who has extensive experience in the skills, construction supply-chain and technology sectors and in large and small business change management, starts the newly created position in March. His role includes driving the CIOB’s next stage of development, delivering membership growth, operational efficiency and improving the quality of services to members.

The position was formed reflecting the growth and breadth of increase in the CIOB’s influence in construction, improving standards, skills and professionalism in the industry.

Reacting to his appointment, Terry Watts said: “The construction sector faces huge challenges and opportunities presented by new technology and changing skills requirements. I am delighted to be joining the CIOB who already lead the way in professional development of the sector and look forward to playing a part in building a successful future for this vital part of the economy.”

Chris Blythe OBE, Chief Executive at the CIOB, said: “As the pace of change in construction accelerates, we at the CIOB are determined to maintain our position at the forefront of preparing our members for developing their career in the industry. Terry’s appointment is another step in building the capability and capacity of the CIOB to meet our members expectations.”

Terry joins the CIOB having set up and run, as CEO, Proskills, the Sector Skills Council for the supply chain to construction, and more recently a portfolio of interim activities that saw him as Principal of City of Oxford College, Group International Business Director for a major training company and work in India, Vietnam, Egypt, as well as with the Financial Services sector in the City among other assignments. Terry started his career at IBM and spent a number of years with technology start-ups before joining e-skills UK, the SSC for the technology sector. He brings a broad range of management, change, project and marketing skills to the CIOB.

The Chartered Institute of Building (CIOB) has announced the first ever World Quality Day Conference.

Leading bodies in the built environment have signed a joint statement calling on the Government to require the installation of sprinklers in...

The CIOB is today announcing the launch of a new Hub for members in the Highlands and Islands of Scotland. The virtual launch event is being...

The world’s biggest photography competition for the built environment, the Art of Building, returns on...