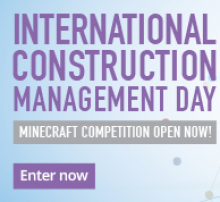 With more than 70 million copies sold Minecraft has taken the online gaming world by storm.  Recognising its potential to attract the next generation of construction managers the Chartered Institute of Building has developed a competition that challenges players to come up with imaginative solutions to future housing needs.

Launched to celebrate International Construction Management Day (14 March 2016) the CIOB Future Housing challenge encourages entrants to design and build their idea for a three bedroom house within limited land space and with considerations for the environment and energy use as part of the brief.

Ciaran Gallagher, CIOB competition organiser said: “Minecraft is a great opportunity for the industry to tap on the shoulder of the next generation and promote a career in construction.  Unlike Lego you can have direct interaction with the player and that is something the industry should explore further.

“The game has diverse applications and is being used to engage the public in planning built environment projects like Blockholm, a vision for the future of Stockholm. In Northern Ireland secondary schools across the country are using Minecraft Education to teach maths, communication skills and team work. Skills all needed in a rapidly digitising industry.

“Our competition last year attracted players as young as eight as well as those well into their construction career. We are expecting a range of ideas this year that should throw up some interesting solutions to the challenges facing housing.”

The winning entry will receive a 3D print of their design from the CIOB.  The competition is open until 26 April 2016 and is open to all age ranges. Entrants will need a copy of Minecraft (PC Version) to take part in the challenge.  The competition can be found at www.ciob.org/ICMD.

Continuing its pursuit of using the Microsoft platform to engage young learners the CIOB is developing freely available Minecraft Education lessons that can be downloaded by teachers across the globe.  The virtual lessons are set to be launched in the summer and will include exercises like restoring Battersea Power Station.