CIOB Home Back to CIOB
You are here:Home Media Centre CIOB News British and migrant workers at risk of exploitation on UK construction sites, says CIOB 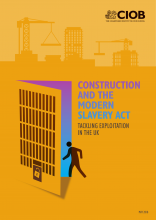 The Chartered Institute of Building (CIOB) is urging UK contractors to face up to the significant human rights risks in their supply chains, with the launch of a new report that finds both British and foreign workers at risk of exploitation.

Criticising the industry’s slow response to the Modern Slavery Act, CIOB’s report highlights the aggressive business models that are creating an environment for unethical procurement and recruitment practices, and the systemic auditing failures that are allowing criminals to infiltrate major projects undetected.

Problems are set at the top of supply chains with lowest cost tendering, abuse of the retentions system and late payment pricing out ethical practice. The situation is creating an imbalance of power that leaves all nationalities vulnerable to exploitation. Illegal activities such as blacklisting are also believed to be continuing, despite recent high profile court cases.

Major contractors in construction typically have long and fragmented supply chains, with little visibility beyond tiers one or two. They are also heavily reliant on temporary migrant labour, a significant indicator of risk. Nevertheless, the report found examples of complacency and disbelief that major projects were vulnerable to criminal infiltration and human trafficking. This contrasted with incidents of modern slavery being found on major UK infrastructure programmes, PFI hospital projects, power plants, recycling centres, renovation projects, demolition sites and local authority schemes.

Construction and the Modern Slavery Act includes interviews with a number of leaders and influencers, including:

The report explores the legal, investor and social pressures for driving change. It also highlights examples of industry best practice as well as platforms for information sharing, such as the GLAA’s construction forum.  Strategies for rehabilitating survivors of slavery are included through the Co-op Group’s Bright Future programme.

CIOB is calling for a new industry narrative: asking contractors to acknowledge that every supply chain is at risk and collaborate more widely to combat crime. It is launching a Routemap to Fair Business which sets out steps for raising standards for all workers and suppliers, encouraging a more proactive approach to tackling systemic issues.

Chris Blythe OBE Chief Executive at the CIOB said: “It’s time to get real about the challenges facing UK construction. Contrary to public perceptions, modern slavery is not confined to small illegal operators. Criminals are attracted to big business because of the greater profits that they can earn. Unscrupulous labour providers, operating in the grey area of the law, are also creating misery for thousands of British and foreign workers.

“We need to change the conversation that we have with clients, our peers and the media. Suppliers and labour agencies should be rewarded for finding and reporting problems, contractors need to promote fairer business models and clients need to be more explicit about their ethical expectations. This goes to the heart of professional leadership. We need to empower everyone working in this industry to act, share and collaborate for the greater good.”

Independent anti-slavery commissioner Kevin Hyland OBE said: “The construction sector is recognised around the world as one of the highest risk industries for workers to be exploited in forced labour. It is therefore crucial that construction companies take meaningful action to prevent this crime from taking place within their operations and to ensure that anyone working in the sector within the UK or abroad are protected from abuse.

“This new report from the CIOB builds on its previous good work highlighting the issue. It provides clear ways for responsible companies to tackle slavery and ensure their labour supply is protected. I hope to see many construction businesses taking up its recommendations and making real changes, so that it can set an example to other high risk sectors.”

Roger Bannister, interim chief executive of the GLAA, said: “There are huge profits to be made for those unscrupulous enough to exploit vulnerable workers and the building industry is extremely lucrative for them. We have carried out operations targeting those who traffic migrant workers into the UK and then force them to work on construction sites, often with false IDs.

“The protocol we developed in the autumn with the construction industry was a step in the right direction with some big names committing themselves to share information and play their part in tackling exploitation. We’d like to see more companies put their name to it and work with the GLAA in helping eradicate slavery altogether.”

Andrew Wallis OBE, CEO of anti-slavery charity Unseen, which operates the Modern Slavery Helpline, said: “The exponential growth in calls to the UK’s Modern Slavery Helpline since its launch in October 2016 clearly shows that the scale and complexity of the problems faced in this country are much greater than originally thought. Over 72% of potential victims indicated through the Helpline in 2017 were because of situations of labour exploitation or forced labour with 58% of victims identified as male. The construction sector represented the third most prevalent type of forced labour exploitation cases reported. Economic abuse and isolation were the most common forms of control by the enslavers.

“The fundamental challenge the construction sector faces is that its default business practices facilitate forced labour exploitation. An extractive profit model, based on a repeating subcontracting framework, has created the conditions for illicit traders in human beings to flourish. When added to the fact that many companies are not proactively engaging with the spirit of the transparency in supply chain legislation, the perfect environment exists for people to be exploited.

“Unless there is a wholesale review of current ways of working, we should not be surprised that we continue to have problems in this sector. Tinkering around the edges will not deliver the freedoms victims deserve.”

Roy McComb, deputy director at the National Crime Agency, said: “Slavery is not a thing of the past. It’s a very real crime that seeks out vulnerable people and exploits them for criminal profit. It affects all types of communities across every part of the United Kingdom.

“Labour-intensive sectors like construction, where temporary and irregular work are common, are high-risk sectors for exploitation. Tackling modern slavery is a priority for UK law enforcement but everyone has a role to play in spotting and reporting this crime.

“We welcome this report and hope that it acts as a reminder to all employers within the construction industry that labour exploitation does exist and they are responsible for ensuring their supply chains are compliant with modern slavery legislation.”

More information is available about the CIOB's work to tackle Modern Slavery in Construction by clicking here.

Construction and the Modern Slavery Act