CIOB submits its response to "Building a Safer Future" consultation 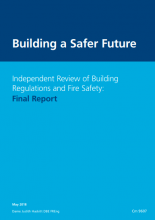 The Ministry of Housing Communities and Local Government (MHCLG) published proposals last month for a “radically new building and fire safety system”. Their consultation on the proposals has now closed and the Chartered Institute of Building (CIOB) has submitted a response.

The CIOB is broadly supportive of the 53 recommendations to establish a new regulatory framework and drive a culture change to create and maintain safe buildings. The CIOB has been active in supporting this reform, participating in the Industry Response Group (IRG), the Competency Steering Group (CSG) as well as several working groups.

Alongside involvement in government initiatives, the CIOB has a Construction Quality Commission, led by a group of CIOB Past Presidents, and working with members and other industry organisations, to identify the main issues either promoting or preventing the delivery of quality in construction. So far, the Commission’s work has resulted in the launch of a course in Construction Quality Management, the publication of a new Code of Quality Management and the development of a massive open online course (MOOC) on quality, which will go live later this year

Eddie Tuttle, CIOB Director of Policy, Research & Public Affairs, said: “The success of the new regime is heavily dependent on how the new Building Safety Regulator is constituted and how it operates. The consultation document contains few details on this. The CIOB would like to see more information on the plans and to have the opportunity to contribute to the development of a model which provides a robust regime in the future. CIOB members across the industry, including project managers, site supervisors and those who work in public and private sector building control, will all be affected by this and must be consulted on the operation of the regulator.”

The full CIOB response, which has been informed by several CIOB members with a background in fire safety and building regulations can found on the CIOB’s Policy web site: Building a Safer Future: Proposals for reform of the building safety regulatory system consultation.