CIOB Home Back to CIOB
You are here:Home Media Centre CIOB News CIOB surveys the sector to gather data on mental health and stress 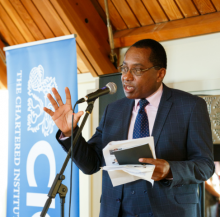 The Chartered Institute of Building (CIOB) is undertaking an extensive survey into mental health within the construction industry. This is increasingly becoming a critical issue within the industry; the CIOB is responding to recent figures from the Office of National Statistics (ONS)* which found that men in the UK construction industry are almost four times more likely to take their own lives than men on average.

Professor Charles Egbu, President of the CIOB, said of the survey: “This is an incredibly important issue and one that aligns with the theme of my presidency. For over 20 years I’ve been looking into the area of mental health and wellbeing and there is much research out there which sets out the scale of the problem and shows that it is complex. My hope for the outcomes of the survey is that, although there’s no one solution that addresses these issues, we can gather data which will point to practical support and solutions that will work.”

Anyone currently working within the industry is being invited to complete the survey, which is now open. CIOB members and non-members are being asked to provide their insight into this important topic. All responses will be anonymous. However, there is the option of leaving an email address to be entered into a draw to win a £100 Amazon gift voucher.

The link to the survey can be found here. (It should take less than 10 minutes to complete)

The results from the survey will be analysed to establish which are the primary pressures on construction workers at different levels (e.g. director, site manager, site worker etc.) and whether there are any other patterns across the responses. Depending on the analysis, this information is then likely to be used to:

It is anticipated that the CIOB’s report with the analysis of the survey will be available early next year.

*Office for National Statistics, Suicides in the UK, data from 2017

Suicide is the leading cause of death for men under 50 and about four in five (10,688) deaths included in the analysis were among men. The ONS found low-skilled male construction workers had the greatest risk, at 3.7 times above the national average.

Building finishing trades, including plasterers, painters and decorators, had a risk twice the national average.

With a UK construction workforce of around 2.1 million people (approximately 6% of the total UK workforce) the statistics suggest that around 350,000 construction professionals may be affected by mental health issues

Randstad, Taking down the walls around mental health in construction, Sept. 2017

A survey conducted by recruitment firm and HR services provider Randstad revealed that nearly a quarter (23%) of construction workers said they were considering exiting the industry within the next year.

The report, which surveyed around 3,400 construction workers also found that 73% of respondents felt their employers did not recognise the early signs of mental health problems.

Among the main reasons cited were high levels of stress and challenges in striking a work / life balance.

Stress, depression or anxiety and musculoskeletal disorders accounted for the majority of days lost due to work-related ill health, 15.4 million and 6.6 million respectively.

On average, each person suffering took around 16.5 days off work. This varies as follows: