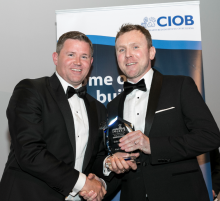 Alan Barnes ICIOB, of Collen Construction, has been named Ireland’s Construction Manager of the Year 2019. His award came as the result of his work on the Scots Church in Lower Abbey Street, Dublin, and he received his medal at the CMYA Ireland celebration dinner at Croke Park Stadium last week [20 June 2019].

The Construction Manager of the Year Awards (CMYA) in Ireland recognise the achievements of those leading complex and involved projects. CMYA is seen as a prestigious honour within the industry and one which is much coveted for its recognition of the excellence and exceptional skills of the recipient.

The project that led to Alan’s nomination and gold medal win was the conservation and refurbishment of the existing Scots Presbyterian Church, a protected structure situated on Abbey Street. The work involved the erection of a complex 7 storey exoskeleton steel frame around the existing church, providing new state-of-the-art office accommodation as part of planned expansion of existing office headquarters at Lower Abbey Street. The risks and challenges encountered on this project required ingenuity, dedication and construction management skills, delivered to an extremely tight budget and time frame.

The judges commented that: The project involved complex works and innovative construction methodologies, which were imaginatively exploited by the candidate. The analogy of the enormity confronted by the candidate was described by one of client’s senior property management staff as akin to performing “open heart surgery on a live patient”.

The announcement of the finalists for each category follows a rigorous assessment process which sees the CMYA judges assess paper applications, as well as conducting site visits and panel interviews. The competition culminates with an awards dinner where the winners of each category are awarded gold and silver medals with one overall winner chosen from the gold medallists.

CIOB Director of Operations, Amy Gough, said in her remarks at the ceremony: We need to take every opportunity we can to celebrate the excellence that exists in our industry. Not just to inspire the next generation or to help us create a movement that improves the whole performance of the industry but to tell society, at large, about the impact and long term legacy our projects deliver.

Some additional background on the Scots Church project can be found on the Collen Construction web site.

This is the nineteenth year of CMYA Ireland, which is held once every two years. Details of the previous award winner can be found here: https://www.ciob.org/past-winners-cmya-ireland-2017