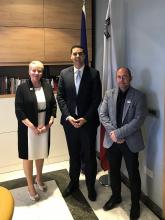 How the booming construction economy in Malta ensures quality throughout its infrastructure is at the centre of discussions between the Government of Malta and the Chartered Institute of Building (CIOB).

Ian Borg, Malta’s Minister for Transport, Infrastructure and Capital Projects, said: “We recognise that if we want quality buildings that can stand the test of time, and are adaptable for the future, then we need to ensure that the right people with the right skills are shaping our built landscape sustainably.  The work of the CIOB in this area is particularly relevant as is the quality of their membership.  We encourage the CIOB to grow its membership base in Malta as we look to attract more Chartered professionals.”

According to figures released by Eurostat, the European Union’s statistical arm, between 2015 and 2019 production in construction in Malta grew by 41% and that growth puts Malta in the top 5 countries for construction activity in the EU.

The CIOB is campaigning for a greater focus on quality in construction following the outcomes from its own Construction Quality Commission. Established in 2017 the commission was formed as a response to the tragic Grenfell Tower incident in London and the closure of 17 schools in Edinburgh that were found to have defects.

Caroline Gumble Chief Executive of the CIOB who travelled to Malta last week at the invitation of CIOB Member Jesmond Chetcuti to witness the significant investment in the built environment said: “Malta has such a rich history with some of the oldest free-standing structures in the world. There should be an expectation that what is built today will also last for hundreds of years and have the capability of enhancing the lives of both today’s society and for future generations.  Membership of the CIOB is about being a true professional, with skills and experience that are current and behaviour that is ethical.  We encourage managers and leaders in Malta’s construction industry to join us so that together we can ensure a legacy of quality buildings.”

Membership of the CIOB is comparable to a bachelor’s degree level and Fellowship is comparable to a British Master’s Degree. The CIOB is the world's largest and most influential professional body for construction management and leadership with more than 45,000 members worldwide.

What it means to be a CIOB member