CIOB Home Back to CIOB
You are here:Home Media Centre CIOB News New report from the CIOB - The Value of Construction: Scotland

New report from the CIOB - The Value of Construction: Scotland

The CIOB – the Chartered Institute of Building – is today launching a new report at a parliamentary reception in Edinburgh, entitled “The Value of Construction in Scotland”. The evening event, which is part of the CIOB’s annual Member’s Forum, will be attended by a number of MSPs and many senior figures from the construction industry.

As the introduction to the report makes clear, official figures suggest that the construction industry accounts for approximately 6% of total gross value added (GVA) to the UK economy. At more than £100 billion annually, that is significant. However, this grossly underestimates the true value of the industry and, to show how important the sector is, the CIOB is producing a series of reports looking in detail at the economic importance of construction to each part of the UK.

Among the headlines in the report focussing on Scotland:

•Scotland’s construction sector emerged faster from recession than most of the UK. However, its path since 2015 has been less vibrant with signs of output falling.

•The contribution of infrastructure to the construction sector over the past three years has been higher in Scotland, at 20%, than the GB average of 12%.

•Although trends indicate infrastructure work looks set for a drop, new housing, particularly in the public sector, is expected to grow.

•Employment is set to expand slightly between 2019-2023. The region is forecast to have an annual recruitment rate of 2,790 new workers each year (approximately 12 new recruits for every 1,000 currently in the workforce).

Eddie Tuttle, the CIOB’s Director of Policy, Research & Public Affairs, said: “the CIOB’s key recommendation is to examine how to moderate volatility in the Scottish construction industry; trying to take steps to smooth out the work so that the sector is not so reliant on infrastructure projects. As one practical output of this approach, during upturns and downturns, there should be less volatility in the workforce, with fewer workers leaving the industry.”

The CIOB’s new President, Professor Charles Egbu, who hosted the Edinburgh Castle event, said: “The challenge is ensuring that we have a construction industry that’s fit for the future – across Scotland and the rest of the UK. The Construction Industry Training Board’s Construction Skills Network 2018-22 refers to this indicating that construction output is expected to grow over the next five years, with 158,000 jobs to be created. Getting a clear economic picture of what’s happening in our industry in each region is going to enable us to develop and deploy the skills and resources needed to support the crucial work our industry does across the UK.” 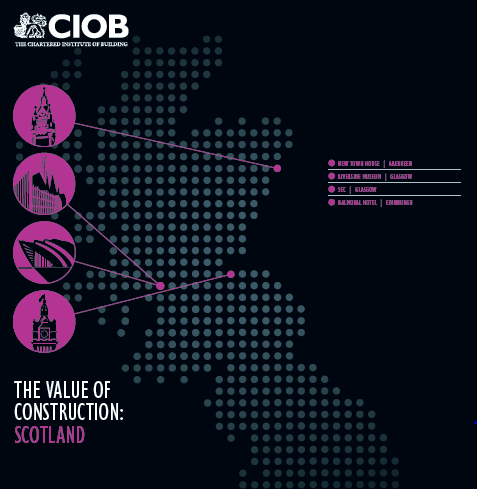 The reception will be attended by several Members of the Scottish Parliament, including Kevin Stewart MSP, Minister for Local Government, Housing and Planning, and Monica Lennon MSP, Scottish Labour Shadow Cabinet Secretary for Health & Sport and Chair of the Cross-Party Group on Construction.

Kevin Stewart has also today published a blog for the CIOB, entitled Investing in Scottish infrastructure, which outlines some of the planned investment coming from the Scottish Government, with specific reference to the Scottish Infrastructure Commission which was set up earlier this year.

“The Value of Construction in Scotland” report is one of a number that will be produced by the CIOB this year, looking at every region of the UK. The full suite of reports will be available later this year.